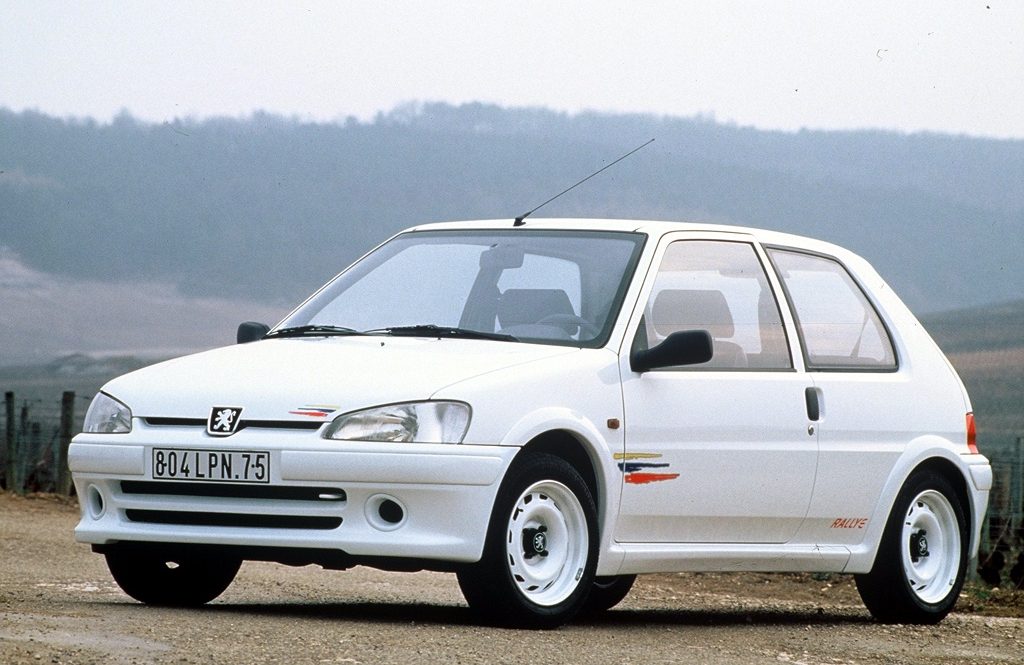 The Peugeot 106 first arrived on our roads way back in 1991, remaining in production for over a decade until it was replaced by the 107 in 2005.

In many ways the 106 represents the end of a styling era for Peugeot, part of a family of French greats which includes the well loved 306 and 406 – design icons in their own right.

Very early 1.0 and 1.1 engine cars were carburetted, with fuel injection arriving in 1992. Not many of these early cars remain, as rust, rot and of course, abuse and mis-use were the usual suspects in killing them off. As the car of choice for many a ‘new driver’, most Peugeot 106 examples lead a tough life. If they weren’t being beaten up on the streets of Paris they were being rolled into fields all across the shires, piloted by over exuberant teenagers who were not long shot of their training wheels… or L Plates.

Learner drivers weren’t the only people who had noticed that the 106 had racing credentials. Peugeot themselves had cottoned on, and formed a plan to go racing.

Peugeot wanted to take the 106 Rallying, the just needed to homologate a fixed number of road going cars to take the 106 racing. The target was international Group N and A rallying class. This meant a minimum number of road cars had to be produced. In line with homologation rules, 1,000 examples of the S1 Rallye were produced (many of which are logged and catalogued by http://www.106rallye.co.uk/).

You’re such a lightweight!

The Peugeot 106 Rallye was the ‘fewer frills, more thrills’ version of the already lightweight hatchback.

Weighing in at just 825kg, the 100bhp S1 Rallye offered buyers the sort of thrills that a Porsche 911 can only dream of. Based on the existing 1.4 XSi platform, the Rallye offered more revs, better damping, a stronger chassis, improved looks and…. less kit.

Available in just three exterior colours, the 106 Rallye offered a pure and simple driving experience at a time when the automotive world was going technology mad. Like a basic Nokia in a world of smart phones, it was a car that did exactly what it set out to do with no hassle, no fuss, just a whole heap of smiles.

With it’s improved suspension, better braking and removed weight, the 106 Rallye was an absolute hoot to drive. In the age of gigantic alloy wheels, the 14 inch steel wheels and basic interior went against the grain of what the automotive market was doing, making it an instant hit.

Combining superb acceleration with genuine steering wheel thrills at all speeds, the 106 Rallye was the perfect candidate for the aspiring boy racer… making good quality cars a hard thing to find!

Raced, rallied, abused and mis-used, the 106 Rallye was a prime candidate for being your local hooligan. And appearing in a field on it’s roof.

Finding a good example more than 20 years on is a difficult thing to do. Even Top Gear destroyed a Peugeot 106 Rallye recently, much to the disdain of pretty much the entire internet.

The example you see here is a true rarity. A low mileage, 3 owner car with superb provenance and a proven paper trail.

Showing just 40,000 miles, the odometer reading is backed up by a comprehensive service and verified MOT history.

Underneath the car is exceptional, untouched, showing the original factory finish. Likewise, inside is immaculate and totally original.

With just 1,000 examples made, the Peugeot Rallye S1 is hard to find in good condition.
To find one with such good provenance is getting almost impossible.

An honest car with an honest history. Not one to be missed.

Click here to view this car in our showroom

Have one for sale? Get in touch.