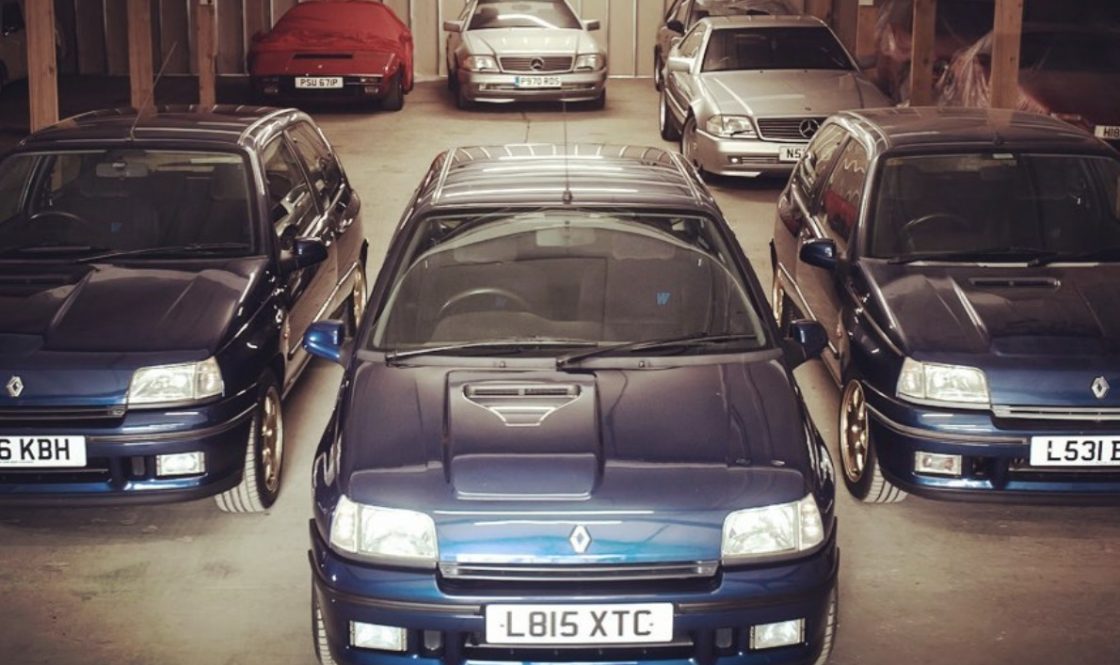 About the Renault Clio Williams:

The Renault Clio Williams was introduced to allow Renault to go racing, back in the days of the homologation special. In order to achieve eligibility for rallying in classes A to N, Renault had to produce a certain number road going racing cars.

Renault wanted to showcase the Clio in the up to 2,000cc class, but the existing range only offered engines up to 1.8 litre displacement (the 16v model). To go racing, Renault would have to produce 2500 road-going versions of the Clio with a two-litre power plant.

Underneath the bonnet sits a modified version of the already very good 1.8 litre 16v engine. Capacity was increased to 2,000 thanks to a longer stroke and bigger bore. A stronger camshaft was borrowed from the Clio diesel, along with new pistons and conrods, larger valves and a lightweight exhaust manifold. All of this helped the little car to achieve almost 150bhp.

Keeping the package together was a reinforced subframe (borrowed from the Clio Cup race car) whilst the springs, shock absorbers, rear torsion arms and anti-roll bars were all uprated. This resulted in a 34mm wide track and winder wheels than the 16v model, offering better handling and cornering. The larger engine was mated to a stronger gearbox, with revised ratios for quicker acceleration.

Outside the Clio Williams would use the wider body styling from the 1.8 16V, but with the addition of the now iconic offset bonnet vent. The 7J Speedline Alloy Wheels were finished in Gold, the colour of choice to define the Clio Williams.

The Gold theme continued with the decals, contrasting the beautiful Metallic Sports Blue paintwork (code 449). Some choice badging completed the look, giving a wolf-in-sheep’s clothing that was instantly recognisable for those who knew.

The Clio Williams… An instant classic

Just 390 cars were destined for the UK, each numbered with it’s own individual plaque. It was an instant classic, with Renault following the sales success of the Williams 1 with a further two iterations, taking the total numbers to some 13,000…. but it is these early, ‘numbered’ cars that are the most sought after by enthusiasts and collectors alike.

As Modern Classics go, a homologation special is always going to be a big hit. Small production numbers combined with a huge marketing budget make guarantee the popularity of these cars, and therefore shore up the values and buyer interest.

In recent years the Clio Williams has seen a metric rise in demand and attention, helped by the large number of these cars that were… how do we say this… wrapped around lamp posts and deposited upside down in fields. the Clio Williams was a prime candidate for some very bad driving antics, thanks to the low purchase price as values dipped and the accessibility of the performance for wannabee inner-city rally drivers!

Like all hot-hatches before it and every hot-hatch since, many would live hard lives and never go on to enjoy old age… Which is why finding a good one is absolutely crucial.