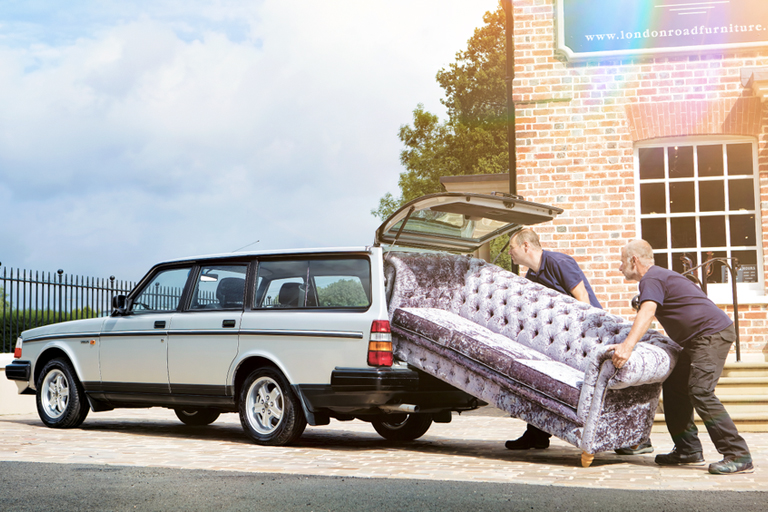 OK so we’ve launched into this one with a big open question… What is the ultimate classic estate car?

What does that mean? Well, much as we’d love something like a Humber Super Snipe Estate, we don’t want to be under the bonnet ever 15 minutes trying to persuade the points to work.

Think of an estate car and you probably picture a Volvo…

Before the world of MPVs and Crossovers, before we had headrest mounted DVD players and iPads and Wifi and Netflix and Minecraft, children up and down the country amused themselves on long car journeys by flicking the Vs at other road users from the rear facing seats of a Volvo estate.

The big Swede is a stalwart of the motoring industry, a favourite with families, antique dealers and anyone looking to lug loads for the past half a century. The most iconic of all the Volvos has to be the 200 series, the original Swedish brick and the vehicle that launched the estate car movement.

With it’s flat front design and huge interior, customers just wouldn’t stop buying them. Such was the popularity of the 240 that despite the 1976 launch it was still being sold in roughly the same format as late as 1993.

Here at Wizard we love these cars, we’ve grown up in them, owned them, restored them and sold them, and we’ve got a rare Torslanda arriving very shortly. Check it out, it’s just beautiful. (There’s also this one, that we sold not too long ago)

No swearing from the back though, please.

The Mercedes-Benz W123 is arguably one of the most famous cars in the world, due to it’s long held title as the world’s most popular taxi. Hop on a plane and fly into any African country and until recently, the chances are you’d have been collected at the airport by a rather fine example of Stuttgart’s greatest saloon (many African nations are now working hard to dispose of their aging fleet of W123 taxis, a crying shame).

When it comes to vintage estate cars, if your family owned a W123 Estate then you were one notch up the ladder from your Volvo owning compadres. With lashings of chrome and those oh-so-comfortable seats, a W123 is capable of covering gigantic distances without so much as a back complaint. (These cars were also available with AMG goodies back in the pre-merger days, but perhaps that’s a blog for another day.. those examples get expensive, like this $143,000 5.0 litre W123 wagon.)

As an accomplished and stylish classic car, the W123 has been riding on the coat tails of the rest of the Mercedes-Benz back catalogue and surfing the gigantic wave of rising values for the last few years. The big problem with the W123 is that it’s suddenly gone all ‘cars and coffee’. Getting into a good quality W123 estate is going to cost you a good wedge more than any of the other estate cars mentioned in this blog.

The trusty BMW E34 is one stylish beast, understated and subtle yet undoubtedly iconic. Built and consumed in a time before the leasing revolution and company car shake up, these were expensive automobiles from an era when driving a BMW meant more than being able to afford a £279 monthly payment.

A range of exciting engines included the uber rare M5 Touring, but at fifty-grand and then some, this probably isn’t going to be the chariot of choice for your retro family transport…. Six cylinder examples are getting thin on the ground, and the four-cylinder 518 at very best can be called ‘adequate’ and at worst could be described as ‘gutless’. Look for a 520i or 525i if you can find it, but buy quickly, because like the Volvo and Mercedes, good ones are thin on the ground and values are rising like the tide.

And finally… OK so this isn’t so much of an oddball, but on looks alone it does take a certain something to get over the aesthetic direction that Audi was headed. Accomplished in every which way, the Audi 100 Avant now looks like a fine and handsome alternative machine when parked against a backdrop of Jukes and Juke lookalikes in your local Waitrose carpark (or Lidl, we’re not judging, and we love the Lidl surprise aisle… we all buy tools in there, its nothing to be ashamed of).

With some juicy, powerful engines to choose from, the Audi 100 makes an excellent choice for retro family transport, but compared to the Volvo 240, Mercedes-Benz W123 and BMW E34 Touring, the Audi is in the shortest supply. These are rare in good condition, so buyers have to settle for whatever the market provides. A unique choice that’s sure to be reliable, if not innumerable.

What classic estate cars have we missed from our list?